Look what turned up today, just in time for the first official day of World Horror Convention.

It’s exciting to have copies of our preview comic in my hand, and I’ve already distributed some to interested parties.

Forgive me if I sound like a Dickens character, but cor blimey mates, the strength of the response to our call for fans on the Róisín Dubh Facebook page has knocked the team for six.

We now have over 430 fans of the comic on Facebook.

We’ll do our best to live up to your vote of confidence.

Rob and I have been in a flurry of discussions about how to get the preview copies of Róisín Dubh to me in time for World Horror Convention. It looks like Rob will get delivery of the copies tomorrow in Dublin, but alas I’m leaving early the following day to catch a flight from Shannon airport to Gatwick. I’ll travel onward from there to Brighton.

We’re hoping the postal service will save the day! At least it’s more likely I’ll have copies to show people at the convention.

Brighton should be an inspiring location for me since much of its architectural character was established in the 19th century, as seen in buildings such as The Royal Pavilion, The Royal Albion Hotel (where the convention is taking place) and The Brighton Pier.

And since language interests me – and perhaps you might like to know – ‘strewth’ is a shortened version of  ‘God’s Truth’, and ‘cor blimey’ comes from ‘God blind me’.

Yesterday I went to Sub-City Comics in Galway to meet Rob at 4pm, and my first sight was his brother, and the manager of the Galway branch, Brian Curley. I had to pick up my comic book order – which included issues of Batman and Robin, Joe the Barbarian and Buffy the Vampire Slayer. I can’t buy as many single comics as I would like, but I always make an exception for Grant Morrison (I’ve been a long admirer of his work), and the Buffy series has been remarkably good.

After Rob arrived we ventured into the city and hunched against a freezing Atlantic breeze. By a miracle we managed to secure a snug in Tí Neachtain’s for our meeting. Alas, we had to abandon it because of the speaker pumping out music above our heads. As we were heading out the door we met local artist/cartoonist Allan Cavanagh, who through the miracle of twitter was aware of our meeting. It’s a small world.

We repaired to the back of The Quays pub – which was quiet at the time – only to have the waitress refuse to get us drinks because we weren’t eating. Our ancestral hospitality is much diminished.

After Rob kindly fetched beverages we got down to discussing Roisin Dubh. It turns out the 10-page preview will not be back from the printers before I leave for Brighton for World Horror Convention, which is a disappointment. I’m hoping Rob will be able to post out copies to me, so I’ll have something to show during the convention.

Then, I snapped open my laptop and we discussed a new project, which is still in its early stages. It’s a great concept originating with artist Terry Kenny. It involves complicated subjects such as identity, shapeshifting, redemption and immortality, so some of the elements require a lot of teasing out. I’d been up until 3am the previous night writing solutions and suggestions, but we still had a lot of work to do to sift through the various story options.

We believe we have a starting point now, and I may even meet with Terry in London while I’m over there.

I’d love to be involved in this project, so fingers crossed it works out well.

Social networking, virtual and in person

I’ve published the fan page for Róisín Dubh on Facebook. Feel free to sign up if you use the site.

Today Rob is travelling to Galway and we’re having a meeting in the afternoon. Perhaps I should take a photograph, since we always seem to forget these things.

But once we start talking about our projects, other comics and films, it’s easy to forget to immortalise the event. I work with social media almost every day, it’s part of my job, but nothing beats a face-to-face chat with a buddy accompanied by your beverages of choice.

Preview at the printers

We’ve had a busy couple of days preparing the first ten pages of Róisin Dubh so they can be bound into a small preview comic. Stephen has been working flat-out, lettering and making tweaks to the final cover.

Up to this point I’ve only seen the pages with Stephen’s dramatic artwork, so it was a thrill to see the captions, character balloons and sound effects. It feels like a real comic now. Stephen, as usual, has produced excellent work. I’ll see if we can get a page or two up in the coming days.

At last today the comic went to the printers! I’m looking forward to holding our mini-comic book in my hands. 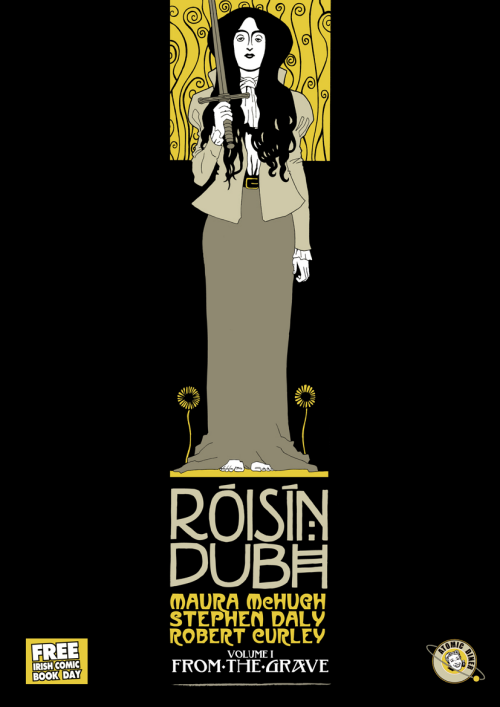 Next week I’m attending the World Horror Convention in Brighton, UK. It’s the first time this convention has been held outside of the American continent. It will also be the first World Horror Convention I have attended. Both of these factors mean I’m very much looking forward to the event. I’ll also have copies of the Róisín Dubh mini-comic with me, to show off to the comic book aficionados.

The following weekend I’ll be going to Odyssey 2010, this year’s Eastercon, in glamorous Heathrow. Eastercon is the largest speculative fiction convention in the UK, and there will be 1200+ people at the hotel. It will be another great opportunity to get advance word out on the forthcoming graphic novel.