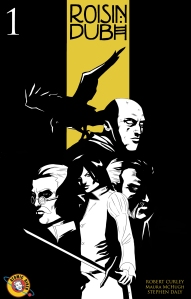 Róisín Dubh is an original graphic novel, due out in 2011 from Atomic Diner, the publisher of Irish titles such as Freakshow and Atomic Rocket Group 66.

It’s 1899, and the cusp of a new century in Ireland. 18-year-old Róisín Sheridan harbours ambitions to become a rival of the magnificent English actress Ellen Terry, if she can persuade her father that a career on the stage is ladylike.

Her plans are destroyed one horrific evening when she and her parents are viciously attacked by Abhartach: a neamh-mairbh who has been released after 1,400 years in the ground.

To survive and seek revenge Róisín must take up a new calling, one determined by ancient Gods whose agendas are not clear, and which will place her entire existence in jeopardy.