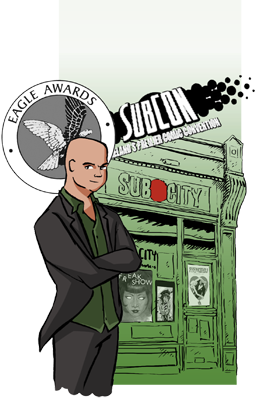 Robert Curley has been involved in the comics industry for over seventeen years now as co-owner of the Sub-City stores with his brother Brian.

Rob set up Atomic Diner publishing in 2004 with the intent to showcase Irish talent to a broader audience and create a home-grown comic industry.

Over the last six years the company has gone form strength to strength with such titles as Freak Show, which was short-listed for an Eagle Award in 2007, and Atomic Rocket Group 66. In successfully fulfilling its original objective the company has helped springboard the careers of artists Stephen Mooney (Joss Whedon’s Angel) Stephen Thompson (Fantastic Four), Declan Shalvey (28 Days Later) and Will Sliney ( Farscape). Freakshow has also featured cover art from Duncan Fegredo (Hell Boy) and Sean Philips (Criminal, Marvel Zombies).

Future projects include The Glimmer Man, Formation 7, The Wyndham Twins, Abigail Williams, Róisín Dubh and The League of Volunteers which will all introduce a new generation of Ireland’s best talent.

To further highlight this initiative Curley set up Free Irish comics day which gives independent creators a chance to showcase their talents around the country with the help of participating comic and book shops.

“I love the idea of creating Ireland’s own comic universe bringing together old myths and legends with new ideas to form a cohesive world of characters which represent the country from the point of view of the comics medium embracing our rich history along with our ongoing creative talent. To date we are one of the few country’s which has no real history in the world of comics. Hopefully over the next couple of years we can change all that.”