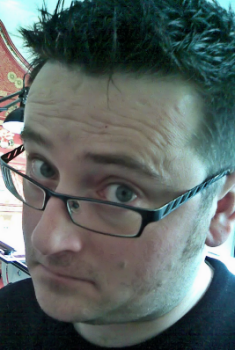 Stephen was born in Dublin in 1972. He lived for most of the 70s in Baltimore, Maryland, USA, where he was introduced to the first love of his life, Comics. The earliest comic he remembers owning was The Amazing Spider-Man, guest-starring Howard the Duck.

When he moved back to Ireland he found a small shop in Stillorgan that sold US comics, and remarkably for a chap not 10 years old, managed to collect all the original Frank Miller Daredevils and other Marvel crud.

Stephen eventually went to art college and now spends his time working on TV dramas and films as a Production Designer, Art Director and Storyboard Artist. He hates the question, “What have you worked on?” because you probably haven’t heard of it, but his credits include The Count of Monte Cristo, The Life and Death of Peter Sellers, Ella Enchanted, Breakfast on Pluto, The Medallion and The Tailor of Panama.

Stephen does a regular cartoon called Phlogiston for The Frontline newspaper in London. He has also done political cartoons for The Sunday Tribune. Róisín Dubh is Stephen’s first “serious” comic.